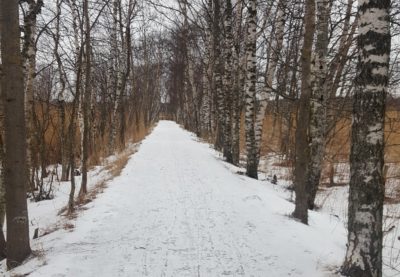 After eating roughly one fifth of the world’s cheese over Christmas, I took a run in an icy Helsinki forest.

That should fix it!

As I ran my mind gave me a number of parallels with career change and – always willing to overextend a metaphor – I thought I’d write about it.

It will feel scary 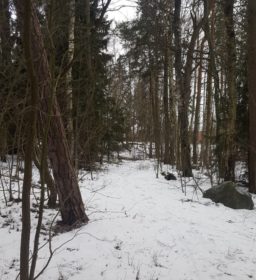 Before the run my mind was full of thoughts of slipping over, breaking a leg, being mauled by Finnish wolves etc.

But whilst the run was sometimes dicey, there was a huge difference to the experience of running on ice and what my mind told me about it.

Just as with career change, our minds hate the uncertainty, but the reality is often different.

Question:  could you be willing to see if the experience of career change is different from what your mind tells you about it?

Nearly all adults know that exercising regularly is essential, but only 20% of adults regularly do so.

I admit I felt odd running so slowly on the ice – surely this looks ridiculous?

At the same time, 87% of people worldwide feel disengaged with work, yet very few actually take steps to change.  Like regular exercise, career change is rare partly because it takes a willingness to step away from what’s ‘normal’.

Question:  Instead of trying to feel confident before setting out, what kind of thoughts or emotions could you be willing to accept in return for taking a first step towards a more meaningful career?

We underestimate our ability to adapt

Humans are generally bad at imagining themselves coping with future difficulties.

But as soon as I hit ice I slowed down, watched the ground and made a thousand tiny adjustments with each step, most of them unconscious.

Even with a radical change in career direction there are a thousand compensatory actions you can take.  We all have a tremendous ability to adapt.  In fact, learning to trust yourself again is one of the most surprising aspects of career change.

Exercise:  try identifying the worst case scenario from your career change, then force yourself to think what you would actually do in that scenario.

When running on ice, trying to get somewhere becomes less important than just making progress in the right direction.  Thoughts of running 10k or reaching a particular landmark pale in importance to just making sure that each step is safe and directionally sound.

We often measure our careers in goals – the pay rise or promotion – but what matters in a career change is how fast you can get good at something new.  In this context, it is the direction that matters, not the destination.  As Kelly Wilson says, he has a terrible sense of destination but a great sense of direction.

Exercise:   What bold move could you take in the direction of a career change this week?

The new path is both essential and dangerous

I would have got lost very quickly without the path through the woods.  In the same way, it is important to have a direction in which to travel when you change career.  Just leaving and hoping for the best is not always effective.

Yet at the same time I noticed that the path was actually the most slippery bit in the forest.  It was the edges of the path which offered the most stable footing.

With career change it is often at the edges of a path that we find our niche.  Psychology is my path, yet I find mainstream psychology jobs either daunting or uninspiring.  It was only outside of the mainstream that I could develop a niche that suited me better.

I’m on the path, but also not on it, and that suits me best.

Exercise:  if you were to make an advert for your ideal job / career, what would it specify?

All paths are dangerous

The next day I took the path in the opposite direction, along the main road and towards the office block I was working in.

In our metaphor, this is the ‘sensible’ corporate route, the path most trodden.

But what was noticeable was that this path was also surprisingly slippery.  And this time I was wearing office shoes.

When we think about changing career, we tell ourselves we are leaving a life of security, but how secure is it really?  People in corporate careers worry about all sorts of dangers, from automation to downsizing to wasting their lives trying to please a crappy boss.

What we tell ourselves is the safer option, is often the opposite.

What would be the costs of not changing career for you?

« The Invisible Visible Key to C...

Is Materialism Blocking Your C... »