When I was a management consultant I was successful, earning well, had lively, interesting colleagues, varied work and good job security.  And I was so miserable that the only things I really looked forward to were weekends and holidays.

On those weekends I would generally get drunk on the Friday and be hungover on the Saturday, then playing sport allowed me to recover enough to repeat the pattern.  On Sunday the creeping dread of the working week would raise its hand and choke the life out of the rest of the weekend.  Holidays were the same pattern, with the dread of returning to work kicking in about halfway through.

In behavioural analyses we always look at the function of behaviour rather than the behaviour itself.  In this case, the function of my drinking was clear: I wanted to forget how miserable my life was, so I drank to be free from that.

And for 12 years or so, it worked.  I was able to bear my career and carry on.

On Saturday I went to go and see the Damien Hirst exhibition at the Tate Modern which I quite enjoyed, but it was Hirst’s interest in pharmacology which really interested me. 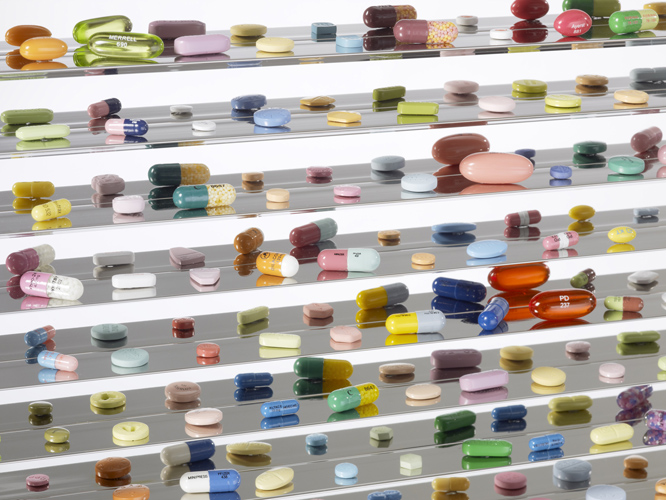 Row upon row of pills.  Jars, bottles, creams, sprays and inhalers.  Whole walls and cabinets full of them.

Each one of these pills fixes a problem.  Each one has been scientifically proven to lessen pain.   That means, in double-blind, randomised control trials they have been proven to beat the effects of a placebo in alleviating suffering.  They work.

But do they really?

Take a look at these slides looking at Obesity trends in the US between 1985 and 2010.

But there are similar (corresponding?) rates of growth in terms of psychological illness, for example:

So what point am I making here?

Well, the drugs don’t work.  Sure, they work in the narrow, clinical sense.  But they are clearly not helping us tackle the causes of psychological distress. What they seem to be doing is anaesthetising us to the effects of our toxic environments.  They are helping to numb the pain, in the same way as alcohol helped numb the pain for me in a job I hated.

When we take a drug, it is not enough to ask whether it is clinically effective.  We need to know whether we are addressing the problem or simply managing it.  Are we making ourselves better, or merely numbing the pain?

If I had not had alcohol to help me, how much sooner could I have turned my attention to the problem that really needed to be addressed?  How much time could I have saved by looking directly at the problem, rather than easing the pain of my toxic environment?

If you are a career changer what could you do if you stopped treating the symptom and tackled the cause?

And what could we do as a society if we did the same?