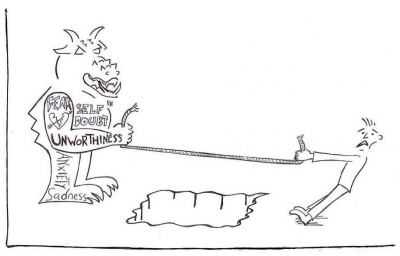 Tug of War with The Anxiety Monster

“The single most remarkable fact of human existence is how hard it is for humans to be happy“.  (Hayes, Wilson and Strohsahl, 1999).

So begins the book that changed my life forever, the first edition of the Acceptance and Commitment Therapy manual.  It articulated something which I already knew to be true without actually realising.  All my efforts to try and be happy had failed.  (And I had tried most things: alcohol, drugs, exercise, therapy, hard work, perfectionism, positive psychology, keeping busy, watching TV, career breaks, denial, blaming other people, re-structuring my thinking…you name it, I tried it).  But none of it worked.  Not for long, at least.

Then I read that line and something shifted.

Not long after I attended a seminar where a metaphor was used:

Tug of War with the Anxiety Monster 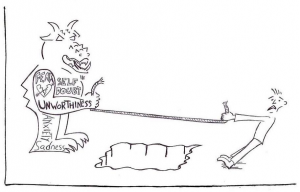 Imagine you are in a tug of war with some huge anxiety monster.  You are pulling with all your might because in between you and the monster is a huge, bottomless pit.  You are spending all your energy pulling because you are sure if you lose you’ll be pulled into the pit.  But the harder you pull the harder the monster pulls.

You’re growing tired and you need to win.  What’s the best thing to do?

Well your mind will tell you to keep pulling, harder and harder.  But the monster never seems to tire.  You’re still stuck.  So what’s the best thing to do now? 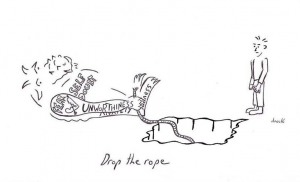 Give up on the battle with your mind to try and control your thoughts and emotions.  This means being willing to have the monster around of course – you have not won the battle.  But suddenly your hands and feet are free to go and do something more productive with your life than engage in a tug of war.

In the case of my own career change, this meant I was freer to move forward with my new business and make progress even on those days when the anxiety monster threw me the rope, again and again and said: 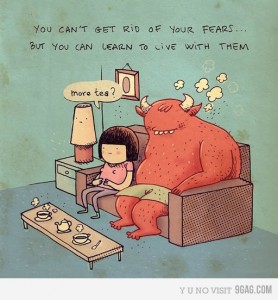